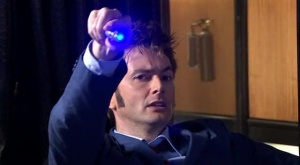 Donna : Yeah. Maybe we can get sentimental after the world has stopped choking to death.

Donna : Where are you going ?

The Doctor : To stop a war!

The Doctor : Yeah. Loving the diplomacy. Ha. General Staal. Since when did you become a coward ?

The Doctor : It’s a phone box, it contains a phone. A telphonic device for communication. It’s sort of symbolic. Like, if only we could communicate, you and I.

Ross : Tell the Doctor it’s that Cordolaine signal. He’s the only one who can stop them.

Sontaran : This isn’t war, this is sport!

The Doctor : Times like this I could do with the Birgadier. No offence.

The Doctor : for the billionth time, you can’t fight sontarans!

The Doctor : Still on Earth, but don’t worry, I’ve got my secret weapon.

The Doctor : Somehow, that’s not making me happy.

Unit officer : Thank you for your lack of faith.

Unit officer : Getting a taste for it, Doctor ?

The Doctor : You might have worn a t-shirt saying « clone ». Although maybe not in front of Captain Jack.

Donna : Have I ever told you how much I hate you ?

Martha : Just… send that thing up. Put it on a delay.

The Doctor : I’v got to give them a choice.